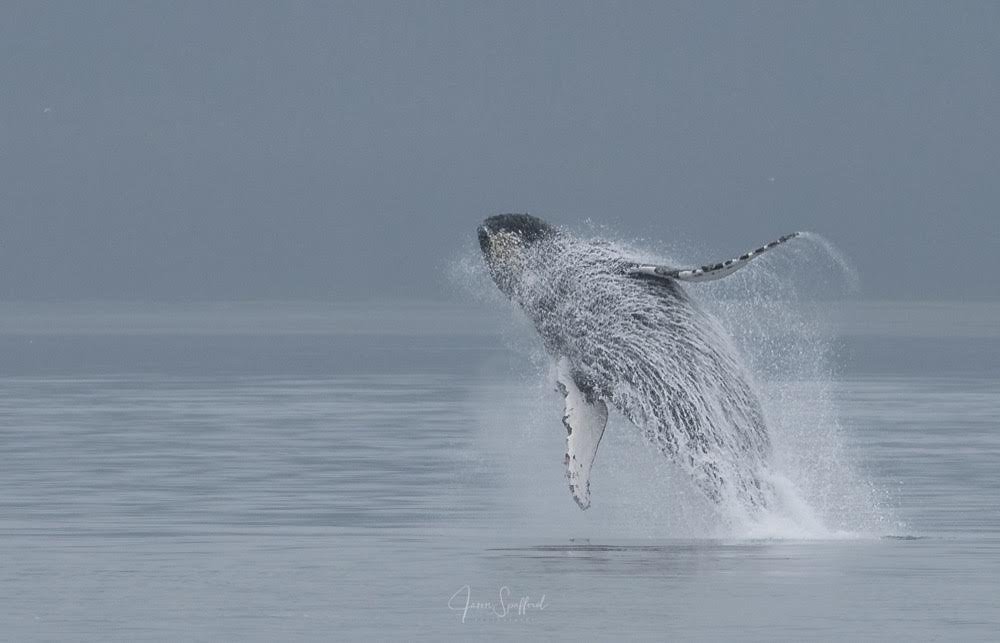 By twowheelednomad September 1, 2017 No Comments

Humpback whales (Megaptera novaeangliae) fit the word “fascinating” to a T, and their classic breaching display is just one specific example of this. When a humpback whale breaches, it essentially picks up speed and then leaps high out of the water and often whirls around while breaching—often numerous times in a row, but sometimes merely once—and then slaps the water by landing on its side or back with a spectacular splash as it comes back down. Why do whales breach?

It’s a good question and one with multiple schools of thought attached. While it remains a challenge for these marine specialists to come to a conclusion as to why humpbacks breach, there have been a number of different theories that may help bring clarity to this topic. Indeed, scientists themselves are still pondering why. Although we have tried asking the whales, they have been somewhat tight lipped…

Likely whales breach to communicate a desire or a need. It is commonly assumed that whales breach as a way to inform others of a desire. Slapping the ocean surface creates a vibration that can travel fast and be heard 6 to 7 miles away. During mating season some species are known to breach much more often than during their feeding season. This suggests that the males may be breaching as a way to indicate a desire to mate or to show off their physical prowess and youthfulness, which may help them land a mating partner.

Breaching may well facilitate communication with each other; the sound made by the powerful breach may signal something significant: “Hey buddy, I’m over here. And it’s this way!” especially in rough seas, when their songs will be harder for other whales to discern. After all, breaching is very loud, and sound travels faster in water. One hypothesis is that they’re trying to shake parasites such as barnacles and lice off their skin. The impact of the mammal smacking against the water may be akin to a dog rubbing itself against a tree to scratch the fleas off its back.

Perhaps breaching is the easiest way for babies to regroup with their mothers when they become separated. The behavior could be a tried and tested method for a male to scare off an intruder too, such as an unattached male trying to mate a female. That is, to let others know of nearby predators and possible threats. One common method for keeping an eye on their surrounding is known as spy-hopping, where the whale lifts itself partially above the water in order to get a good look at its surroundings. Spy-hopping is less dramatic and exposing than breaching, but when combined together it may be an effective method for observing their environment.

Whales may breach to let others know of nearby food. In highly social groups breaching may be used as a method of communicating to others that they have found nearby food. This can be extremely effective in groups that hunt together by allowing them to quickly locate food and strategize their plan of attack. Breaching may even be used as a way to stun the fish so that they can be consumed more easily. Alternatively, they may just want a look around topside. Have a nosy.

Another thought: whales may breach because it’s enjoyable! Dolphins play, why can’t whales? Outlined above are all potential theories about breaching. Who knows, breaching may just serve multiple purposes. Of all these possible scenarios, the ones with the most validity appear to be a combination of using breaching as a form of play, to show off a humpback whale’s physical abilities, and as a way to communicate certain desires to other whales, especially during mating season. What do you think? Ten Must Know Facts on the Humpback Whale

25 Crazy Factoids about the Humpback Whale Early Bird Sale! Save 15% on all Juneau Tours!

Online price match guarantee! Call us if you find our tours priced lower on any website and we will match it!