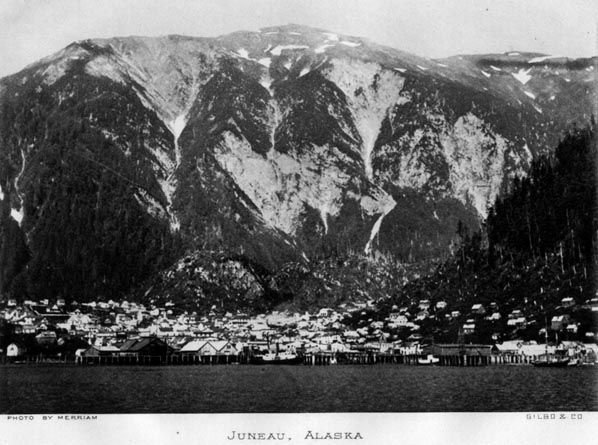 Juneau, Alaska in the 20th century

Juneau, Alaska in the 20th century

So what was Juneau in the 20th century like? Due to the unearthing of oil, whales diminished in the late 1800s. Coupled with the fur trade receding, Juneau replaced Sitka as the capital of the Alaskan territory in 1906.

In the early 20th century, Juneau grew from a seasonal, Native fishing camp where the city flourished from a boomtown to a hub for volume hard-rock mining. The surrounding hills were honeycombed by two mines: the Alaska-Juneau Mine and the Alaska-Gastineau Mine. This was where the loose nuggets of gold in the stream beds were exhausted.

Later, a pair of sizable mills were constructed on the mainland side of the Gastineau Channel. Concurrently, the Treadwell Gold Mining Company set up operations on Douglas Island. The ground once reverberated with the 960 stamps from the mills of world-renowned Treadwell Gold Mining Company. That mine reached peak production in 1915, that is, when a deluge of mining accidents swept through the mines, two years before a cave-in flooded three of Treadwell’s four mines ending the Treadwell era.

Shortages of manpower and supplies brought about by World War II led to the closure of the A-J Mine in 1944. Still today, there are more miles of mining tunnels within Mount Roberts than there are roads in Juneau. Noteworthy, Juneau was the most significantly sized city in the territory during the inter-war period. Namely, having surpassed Fairbanks in the 1920 census. The US government bankrolled $3 billion into Alaskan infrastructure during World War II. Later, to take action in the war effort, it sent in 300,000 troops and support personnel.

Serving as the seat of government for the territory of Alaska, Juneau became a state capital on January 3, 1959, when Alaska was granted statehood. Juneau’s estimated 34,000+ residents are proud hosts for Alaska’s Capital while enjoying the benefits of a small community, beautiful surroundings and the adventure of life in the last frontier. Keeping Juneau as the capital

Opposition between the territory’s bigger cities escalated as Alaska’s population ballooned after the war. In 1954, Alaskans won the measure to relocate the capital north. One provision of this act stipulated that the new capital be situated at least 30-miles from Anchorage or Fairbanks. Hence, this was to prevent either city from flexing unfair power. And thus, holding sway. Consequently, Juneau remained the capital. Greater efforts to move the capital were proposed again in the 1970s. Later in 1894. And again in 1996. All without success.

Alaska was awarded statehood in 1959. Accordingly, Juneau grew proportionately with the rise in state government. Throughout the 1970s, saw the construction of the Trans Alaskan Pipeline. Indeed, the city prospered with another growth spike in state government jobs. Predominantly, due to new oil revenues. However, oil-fueled growth ebbed in the 1980s. Today, the city and borough boasts a population of over 34,000 people. It is the second largest city in the state. Further, it’s the second biggest city (by square miles) in the country—larger than Delaware. Federal, state and local government employs four out of every ten Juneau workers. Commercial fishing and mining are growing components of the local economy, as is Juneau’s role as a regional hub for tourism, transportation, medical services, education and retail trade. Ultimately: tourism is still the biggest contributing factor to the economy.